Iceberg Issue No 3 is the Bone of Contention in this post. After featuring XIII in Issue No's 1 & 2, The Editor of Iceberg decided to give a Break to XIII and decided to Bring on Mike Donovan AKA Mike Blueberry. Here is a Portrait Drawn by Jean Giraud. For those who came in late, Blueberry is the Lead Character in the Franco-Belgian comics western series created by the Belgian script writer Jean-Michel Charlier and French comics artist Jean "Mœbius" Giraud.

It chronicles the adventures of Mike Blueberry on his travels through the American Old West. Blueberry is an a-typical western hero; For He is neither the kind of a wandering lawman who brings evil-doers to justice, nor a handsome cowboy who saves the village from the Thugs and becomes the New Marshall over there - Just like the umpteen Number of Cowboy movies we have seen over the years. Have a Look at the cover of the 3rd issue of Iceberg. 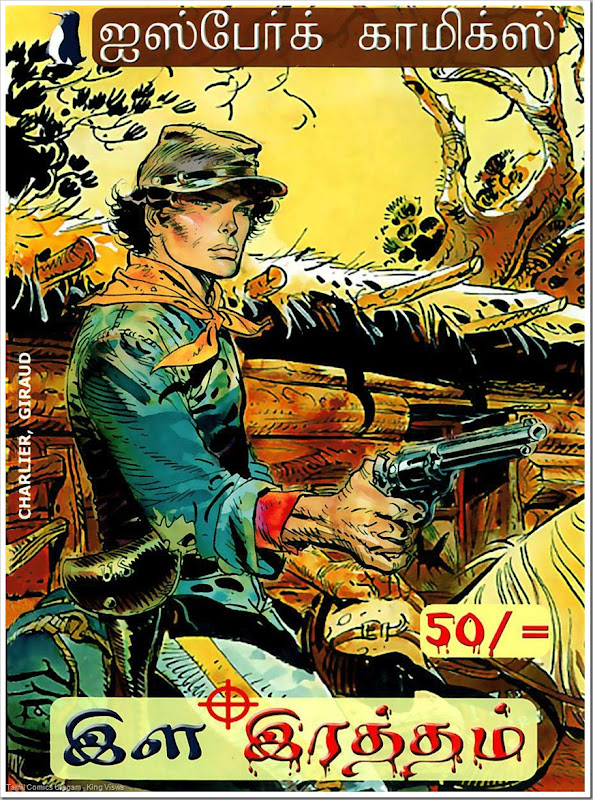 Similar to 2nd edition, 3rd issue also follows the same size and Price.When we received the story, we were more than happy as we have received the Book after 7 months; Yes, the 2nd issue was on sale from 14th April 2006 & the 3rd issue was on sale from January of 2007. The Editor Mr Nisha Haran Has to be appreciated for trying to Re-Capture the international standards by having the Cover similar to the international edition.Unfortunately, i couldn't find the Cover scan of the French edition in time to compare (My personal room in Upstairs is yet to be settled after the Retirement function of My Dad on June 30th). Will post that in the near future. Mr Nisha Haran continued to voice his thoughts & Explanations for the Delay in the Editor's Page called as Hi Readers. We must take note the continuation of writing style and standards followed by Him. Hats of to you sir. We are not Complaining on the Delay Part. We are not in-humans to ask for Books when you are in the Midst of the TOUGHEST political scenario over there. Rather, we appreciate your Love for Comics. 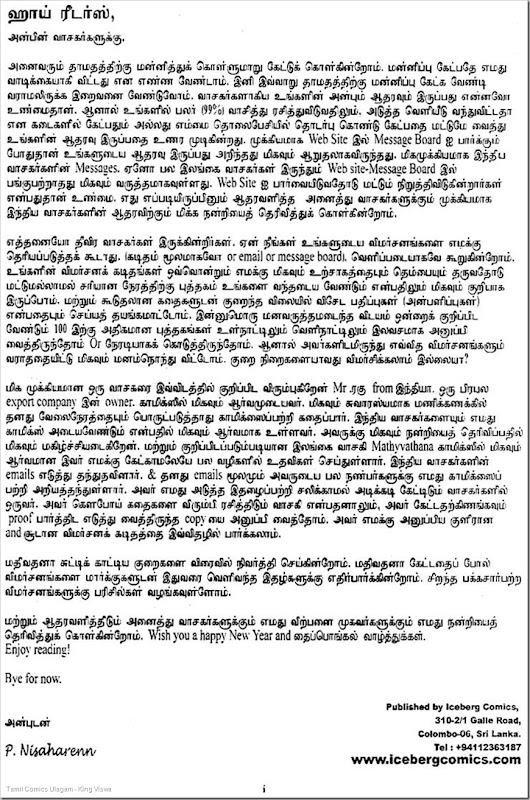 Those, who want to Thank Mr Nisha Haran can visit their Official Site (Which is very much alive & Kicking in spite of the situation.) and pen their support by posting a comment over there in the messages part. It will be of Great support to that Wonderful person, who is worth his weight in Gold. The story, Titled ila Ratham = Young Blood, is about the origin of Blueberry. Have a Look at the 1st page of the story, set in the peak of civil war ridden 1861 where the then persona of Mike Donovan is revealed by Landlord Tucker. A Rich Spoilt Brat that he is, Mike is Loved By the daughter of Tucker. The circumstances force Mike to run away from the Home. 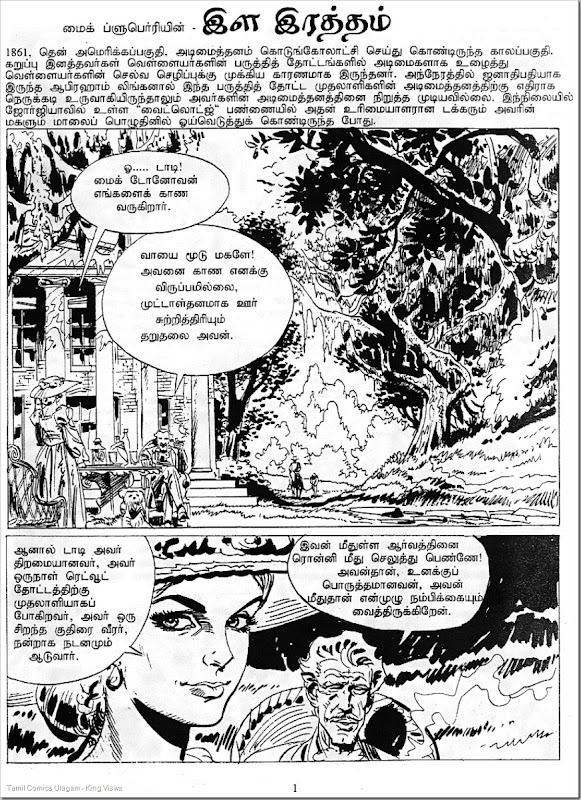 This is the part of the story where the Historic event happens. The Re-Naming of Mike Donovan as Mike Blueberry By himself happens here only. When a soldier asks his name, Mike looks in the bushes (He cannot reveal his real name) and looks at the Blueberries over there and Names himself as "Mike Blueberry". 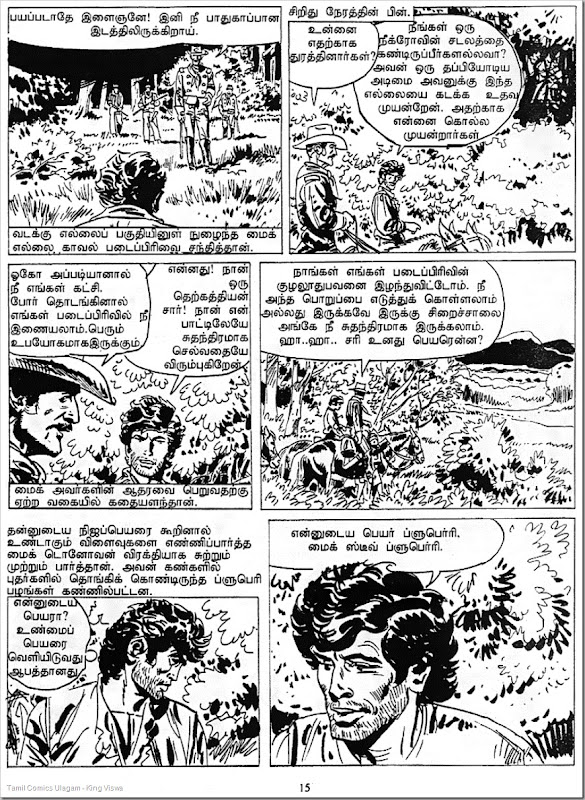 The Best part is that this particular hero has already been introduced to Tamil by the Redoubtable Prakash Publishers as Captain Tiger. Once the 3rd issue of iceberg was on sale, Prakash Publishers changed their Story from their Cow Boy Special Line up. They straightaway swapped Chick-bill for This story & the very next part of this which was announced in the Website of Iceberg Comics.

When we were waiting for the Cowboy special (Circa June 2007), Rafiq raja of Comicology and Yours truly were discussing how the Editor of Prakash Publisher will name the Hero as Captain Tiger. There were discussions among other ComiRades that there will be Tiger drawn on the Strip and Mike will look at the Tiger & get inspired to say his name is Captain Tiger.

The second part of the story is how Blueberry Grows up. This was portrayed in the Story Sattanooga Baalam. 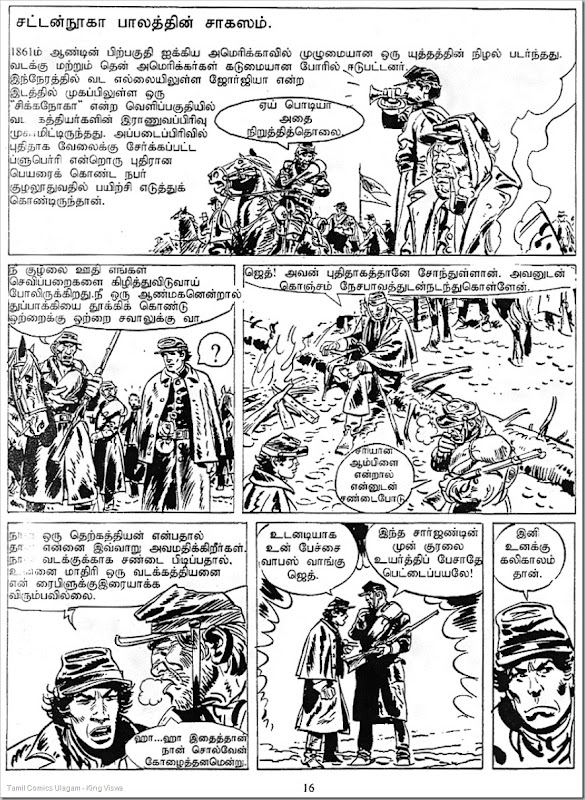 Another set of scans from the same story. Look how the sketches were made. Mobius, You are truly a great Artist. Kudos. 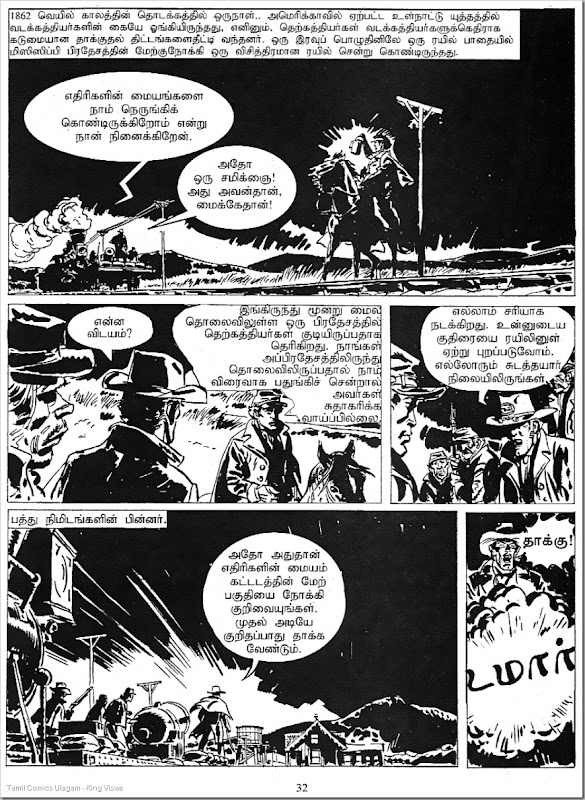 The Last page of the story where the Greatest Decider of Events in Our Life, Called FATE, helps Blueberry to save his life. Imagine the situation where your Childhood Buddy is standing in front of you to kill you with loads of hatred & a Gun of course, and you have no means of escape. Bang. His Gun is empty. 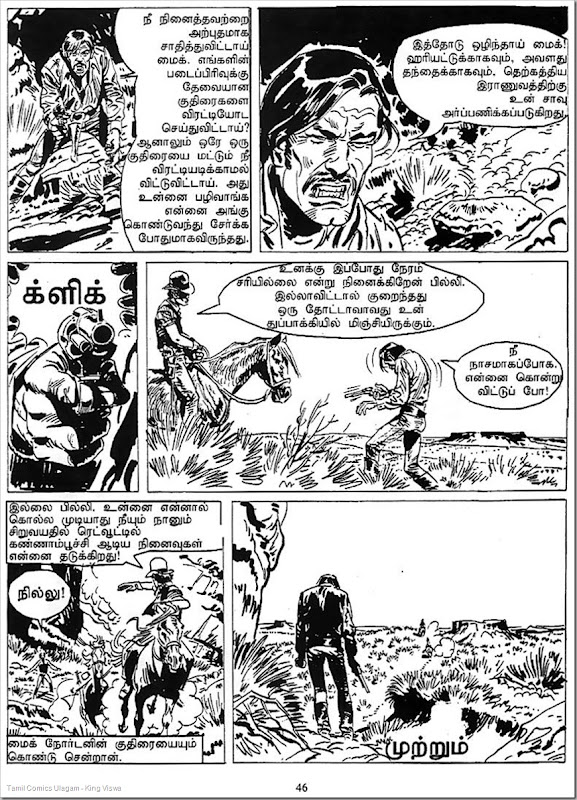 Apart from these wonderful stories, there were letters from the fans (Local & Global). Have a Look on what some of these letters do say. truly amazing. Love for comics has no Boundaries, Truly. 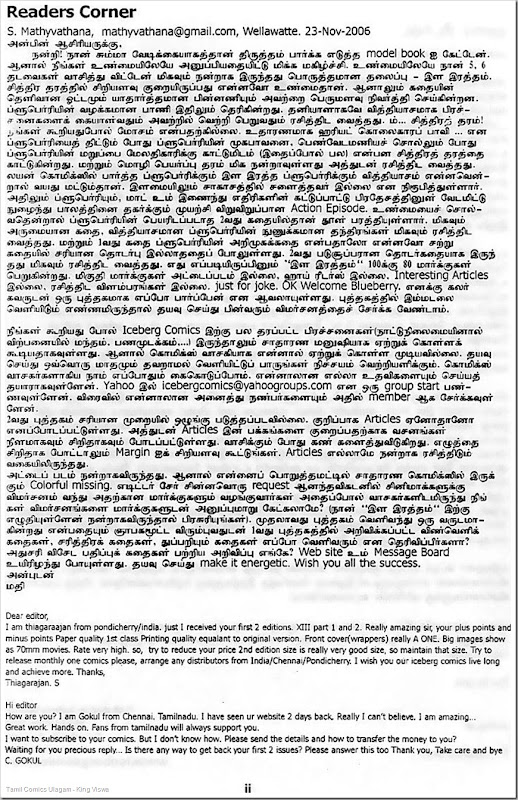 There were some pages which were allocated for Contests, Subscriptions etc. To be very precise, the centre spreads (4 Pages) were dedicated for this purpose. Have uploaded 2 of them for you.

Now, this was the back wrapper of the 3rd issue of Iceberg comics. Look at the way it was made to enthuse the readers. Again, order and format was maintained just like the second issue. I was Wondering that if The Editor can do such a wonderful job from Sri Lanka, what he would have done for the wellness of Tamil comics, if he was not born in a war torn country. God Only Knows. 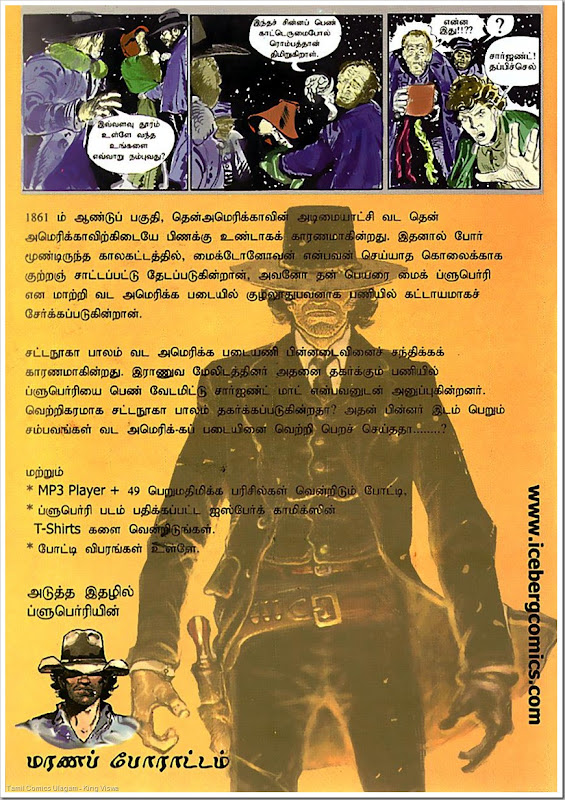 Now, this is for the ComiRades who have a Keen sense of Info related to comics. After the success of the Graphic novel, People wanted to cash in on the Name of Blueberry by making a Movie on the same. However, they made a Mistake by Choosing Mr Jon Kounen, Better known as the music video director having personal interests on Shipibo-Conibo culture and shamanism, with which he became familiar during his trips to Mexico and Peru as the director for the Movie.

So much so, that the late Charlier's Family dis-owned the movie. This movie is loosely based on the story The Last Dutchman's Mine. Have a Look at the Movie Posters (The Movie, even though a French production was made in English & Marketed in US of A as The Renegade). On the insistence of our ComiRades, i have gone through this film. Just like the Late Charlier's family, I also disown the film as part of the Blueberry saga. True Blue ComiRades can give a Miss to this movie. If the director is a master in the Shipibo ayahuasca rituals, let him do that in one of his Music DVD's;

Meanwhile, Those who can guess the names of the trailers announced on the 1st issue of Iceberg Comics, can Mail me / Post as comments. The 1st Three Correct Entries will stand to get a Surprise Gift from Yours Truly (Separate Gifts for Those who reside in India & those who don't). Here is the cover design for the 4th Issue of Iceberg Comics. 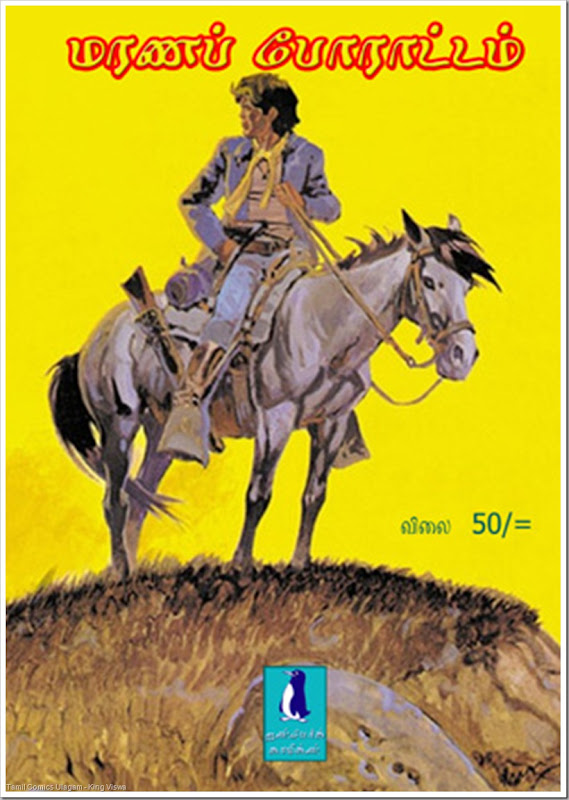 Price: Priceless for Comic Fans; For others, SLR 50/-

Well, that's all for now guys. Feel free to post your comments and suggestions in this blog using the Comments link below my sign or send mail to tamilcomicsulagam@gmail.com.

Kindly Spare a Moment to Leave Your Presence in this Blog By Adding Your Valuable Comments that Can Improve This Blog.

Always Give Due Importance To Others' Views & Never Ever Hurt Others Feelings / Point Of Views.

Do Not Request Anything That Gets Us into a Legal Tangle Such As Copy Righted Materials, Registered Products etc.